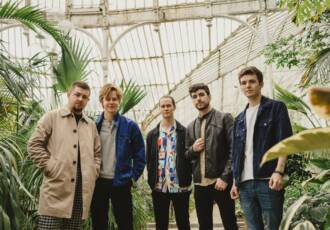 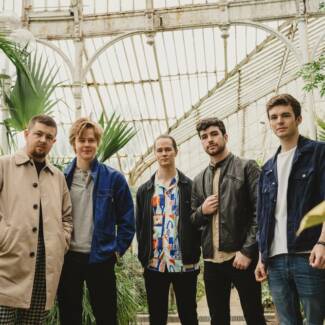 Cúig, an Irish five-piece band from Armagh & Tyrone are tearing up the rule book with their bold approach to their native musical tradition. Since the release of their critically acclaimed debut album, ‘New Landscapes’, for which Cúig were awarded ‘Best New Irish Band 2016’ by the Irish American News, they have taken both sides of the Atlantic by storm having toured extensively in the US, Europe and Ireland. Comprising of Miceal Mullen (banjo, mandolin), Rónán Stewart (fiddle, uilleann pipes, vocals), Ruairí Stewart (guitars), Eoin Murphy (button accordion) and Cathal Murphy (drums, guitars, vocals), Cúig look set to continue this success with the release of their highly anticipated sophomore album, ‘The Theory of Chaos’. ‘The Theory of Chaos’ features high octane original instrumental compositions and arrangements with the addition of original songs, a recording first for the talented five-piece. With a keen emphasis on varied production techniques, the new album conveys a powerful evolution in Cúig’s already distinctive sound. ‘The Theory of Chaos’ allows each members’ individual musical flair to shine while simultaneously gelling seamlessly as an ensemble to create a progressive, exhilarating and polished album which places Cúig at the forefront of contemporary Irish music.

‘Carry On’, an original song from the upcoming album, was featured in a social media advertising campaign video for Aer Lingus filmed at Milwaukee Irish Fest 2018, the biggest Irish festival in the world, which has clocked over 650,000 views to date. Having been in hibernation for a couple of years now, we’re thrilled that Cúig are coming to Belfast to play their only Irish date of 2023.

Mary MacNamara, born in the townland of Clondanagh between Tulla and Feakle, was from an early age in the company of the great masters of Irish Traditional Music of the region such as John Naughton, Martin Rochford, P. Joe Hayes, Francie Donnellan, Joe Bane and Bill Malley. And there was plenty of musical guidance and inheritance from her parents who were both from musical families. Mary learned much from her mother Ita whose discernment in music was unquestionable, with a musical pedigree reaching back many generations. Mary’s musical style was further honed and perfected as a young girl sitting by the fireside in the homes of Mikey Donoghue in Ballinahinch and P. Joe Hayes of Maghera and then Sunday afternoon sessions with Joe Bane and Bill Malley in Lena’s Bar in Feakle. This unique musical nurturing has resulted in Mary being a highly respected musician performing at home and abroad and also one of the most sought after teachers of Irish Music today.

Fiddle player Sorcha Costello from Tulla, Co. Clare is the daughter of Mary MacNamara and hails from a family emerged in traditional Irish music. Sorcha is in great demand as a teacher of music in east Clare because of her ability to transmit her unique style which has the trademark rhythm and swing qualities of generations of her family. She focuses on getting the musicians to bring these out by playing from the heart.