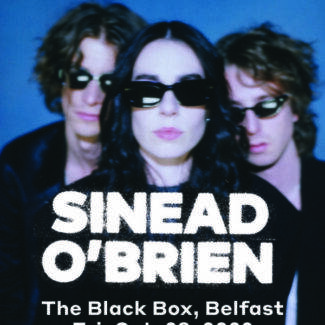 “Quite simply, O’Brien is a hell of a performer” – NME

Communing at the triangulation of words, music and image, O’Brien has always conjured powerful worlds: but none more powerful, or as immersive, than on her debut record Time Bend and Break The Bower, due for release June 10th via Chess Club Records. Sinead performs live at the Black Box as part of her Ireland/UK & Europe Album tour.  In the space that exists between her delivery – at once wry, silky, vicious, and self-assured – and the music – a dynamic, dancing call-and-response from her collaborators, guitarist Julian Hanson and drummer Oscar Robertson – lies a productive tension. Using a method of creating on-instinct, in constant communication with multisensory cues, O’Brien is carving out a space as a musical oracle for an ever-shifting era.

Since 2020, O’Brien has garnered international critical acclaim from titles like Rolling Stone, DIY, Dazed, Dork, Loud & Quiet, NME, Paste, Stereogum, The FADER, The Guardian, The Quietus, and AnOther Magazine, among others. O’Brien has also been consistently supported on national radio: she counts Jack Saunders at BBC Radio 1, and Steve Lamacq and Amy Lamé at BBC Radio 6 Music as champions of her music, with the latter station giving two tracks a spot on their B List. And O’Brien is building on her US support from the likes of Seattle’s KEXP alongside appearances at SXSW – in virtual form in 2021, and live with her band in Texas later this spring.

With a background on the design teams for John Galliano and, later, Vivienne Westwood, it’s no surprise that raven-haired O’Brien’s cultural touchstones also span a rich history of art, photography, film, dance and movement: from Helmut Newton femme fatales and Henri Cartier-Bresson’s bleak landscapes, to modern performance by Michael Clark and Michael Laub companies, to the writings of Virginia Woolf and Samuel Beckett. Recently also tapped by Gucci to perform, it’s clear that O’Brien’s esoteric instincts will continue to inspire those beyond the industry as well as within it.

Coming Soon! Become a member at The Black Box